Question 26a: What Do You Do in Your Spare Time?

During the Swenglish project I tried many new leisure activities or hobbies. Going to the gym was one of them. Not something I've carried on doing though ...
I Don't Do Leisure or Hobbies
I experience the word leisure as problematic. When I went to school I always studied as much as I could. Now I write and perform as much as I can or am involved with culture in different forms. At the same time as I'm studying a bit. Sometimes I get paid for what I do, sometimes I don't.
I also find the word hobby difficult. I write and that's my life. I'm not doing gardering, cooking, knitting, TV-watching. Everything I do is connected to my writing. Okay, I go jogging. But then I usually rehearse poems in my head. Okay, I read books, but often with the ambition to learn something or get inspired by something.
I don't do leisure or hobbies. Apart from when I see other people. Then I can watch films. Have tea. Go to the pub. Talk bullshit. Hang out and just be. But many of my relationships with friends or partners have been focused on/are focused on being creative together and working with different projects.
Blurry Boundaries
Several of the project participants pointed out that if you write, play in a band, paint or do something artistic in general the boundaries between work and spare time can be blurry. For some it might be a hobby to play the guitar or perform, for others it's so much more. Even if there are few who can make a living out of their art there are many who regard their creative work as more than a hobby. It's the same for people who do sports at a higher level. It's a passion. A lifestyle.
What Do You Do To Relax?
I need to learn to relax more even when I'm on my own. When I asked the Swenglish people what they did to relax, several answered that they watched TV or films, read books, went out in nature, went for walks, sat down with a cup of tea (only the English!), drank alcohol, smoked, had a shower, had a bath (only the English!) or listened to music.

Others folded washing, looked at maps, played the guitar, played computer games, surfed the net, did crosswords, played scrabble with herself, slept, hung out with her dogs, snogged someone, did yoga, exercised, spoke to friends and made plans. Only a few listened to relaxation tapes or did meditation. And some mentioned that they never relaxed or found it hard to do so.
Playing Peeping Tom
Extract from Swenglish:
"I’ve always wondered what people do with their time and their lives. When I was little, a friend and I peeped through our classmates’ windows just to see what they were up to after school. Somehow we weren’t quite sure about how to occupy ourselves … My friend also found it very hard “doing nothing”. Even when she reached her 20s she used to call me to ask how I spent my days, but now she’s got children and doesn’t have time thinking about what she’s doing with her time."
PÅ SVENSKA
This study is by no means scientific, the answers are based on interviewing 15 people in England and 15 people in Sweden, aged 22-59. Look out for the next question: What's your relationship to nature?
Posted by Louise Halvardsson at 18:00 No comments: 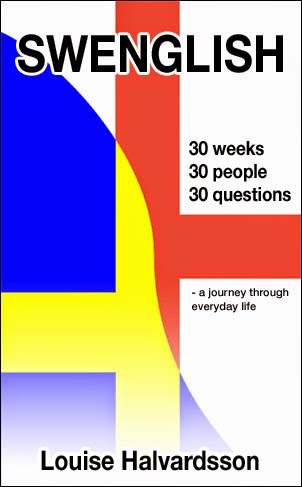 My only resolution for 2015 is to publish the Swenglish book in English in England and have a launch party in Brighton.
It will happen. The cover is already on its way. Design: Sky Apperley.

"As a portrait of two countries the book is interesting enough. The Swedish find the English habit of carpeting toilets to be disgusting. And, despite Sweden having colder temperatures, Sweden is warmer than England, since our houses tend to be draughty and badly insulated. However, the thing I like most was the way the book sketched its characters." - James Burt has written a personal review. Click here to read it.
PÅ SVENSKA
Posted by Louise Halvardsson at 19:04 No comments: