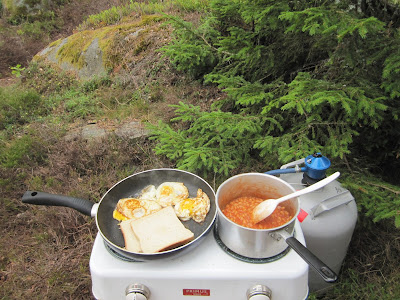 PÅ SVENSKA
Posted by Louise Halvardsson at 09:55 No comments: Links to this post

Question 9b: What are you Most Embarrassed about in your Home?

Even though most homes that I visited in Sweden were of a better standard than English homes, the project participants had similar opinions about their homes: it was the mess they were most embarrassed about. However, I thought that most people had an acceptable level of mess.
People in Sweden had more luxury problems compared to people in England. A small bathroom is better than a damp bathroom ...
(The picture is of my own sink as I don't want to embarrass the people I stayed with by showing pictures of their mess.)

What people in Sweden were most embarrassed about in their homes:
The floor in the hallway and the bedroom
The bathroom is a bit too small
The garden, the stairs that are falling apart
That I don't have any skirting boards in the kitchen
That the laundry place is outside
That we haven't decorated yet
The oblong rice lamp
A tendency to let everything become chaotic, bad organising
The messy kitchen
That it's always so messy
The flower on the wall, that they've painted the wall red and finished half-way through
That I should wash the windows
The wallpaper by the bed, you can see greasy spots from the guy who lived here before
That I haven't used my hoover
That the laundry room is in a mess

What people in England were most embarrassed about in their homes:
The window in my room is dirty
Some DVDs, "some people judge me by my films, but some of them belong to my old housemates”
The damp upstairs
The damp in the kitchen and the bathroom
The location, the surroundings aren't that nice
My landlord's girlfriend ("It would upset me if I treated her the way she treats me.")
My family calendar
A vase I piss in when I can't be bothered (The person had a looong way to the toilet)
It could be tidier
The messyness, things we still need to be doing
That my plumbing is only half-finished
The clutter
The massive telly (that belongs to my housemate)
The carpet in the front room
The dripping tap
The only thing I'm embarrassed about in my new home is that one of my two plants is about to die. I don't know if I've given it too much or too little or water of if it just had a sunstroke.
This study is by no means scientific, the answers are based on interviewing 15 people in England and 15 people in Sweden, aged 22-59. Look out for the next question: What's your dream job?
PÅ SVENSKA

Posted by Louise Halvardsson at 21:34 No comments: Links to this post

Question 9a: What are you most proud of in your home? 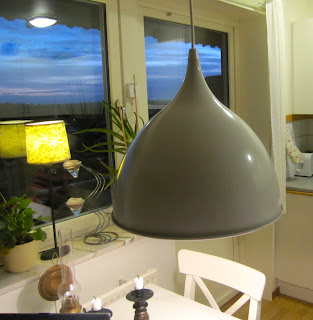 Neither the English or the Swedes are known to be people who brag about their belongings. Most of the people I stayed with found it hard to answer the question about what they're most proud of in their homes. I sometimes had to rephrase the question and instead ask what they were happiest about.
Many of the answers were abstract, but it wasn't surprising that some English people living in small places were proud of how they had organised their space. There were some imaginative solutions including loft beds.
The answer that made me laugh the most was the person who said she was proud of her kitchen lamp (pictured above). "It looks nice, like a pointy hat, but my friend said; 'so you got a tit hanging from the ceiling ...' Now I can't think of anything else, it fucking looks like it."

What people in England were most proud of in their homes:
How I've used my space
My 200 year old chello
My open fire
My yoga/meditation space
My bookshelf
My room, that I've organised my space
The location
That I'm surrounded by books and things that I really love
That I manage to have friends round for dinner
My husband's photographs
A drawing I made
The view
My bed
My autograph collection
That I've managed to fit in so much in such a small space

What people in Sweden were most proud of in their homes:
My bread-baking
The furniture from Nepal
The music studio
The world globes
My plants and flowers
The garden
My kitchen lamp
That it is such a nice old house
My lamps
Our bedroom
My orchids
The record collection
My framed pictures
My drawing that I made when I was 15
That we have created a home to feel happy in
I'm most proud of my catapult, "the statuette" I got when I won the prize for best Young Adult debut novel. I tried to explain to my friend's 6-year-old daughter that it's not a toy!
This study is by no means scientific, the answers are based on interviewing 15 people in England and 15 people in Sweden, aged 22-59. Look out for the next question: What do you feel most embarrassed about in your home?
PÅ SVENSKA
Posted by Louise Halvardsson at 17:18 No comments: Links to this post

Question 8d: How Settled do you feel in your Flat/House?

During Swenglish I lived in many different ways. I stayed with singles, couples and families. I stayed in everything from nice villas to houses that were falling apart. One week I stayed in a caravan, another week I stayed in a community. I slept on floors, on kitchen sofas and spare beds.
Where I felt most at home was often due to whom I stayed with. But sometimes it was just the environment that got me hooked. I felt very happy in the room in the picture above where I stayed during week 3 and I wanted to settled there and give up the rest of the project. Even if there was no central heating. One reason I wanted to stay was that the furniture reminded me of my grandma's house and there was so much space. And I could both smell and hear the sea. My host lived two floors below me, she had a whole house to herself as her landlord had died and the property was up for sale.
At the moment I live on my own for the first time in my life and I already feel settled in my new place. (Even though I sometimes forget in which cupboard my plates live.) Among the project participants who lived on their own there were mixed feelings. Some of them didn't feel very settled even though they owned their own flats and could do what they pleased. Instead they felt lonely or afraid of the dark. Then there were the ones (two Swedes actually) who said "my home is my castle" and found it hard to share with others. In England many people shared with strangers and despite some conflicts they didn't want to live on their own. Partly because of money of course, but they also wanted the company.
A couple of families and some of the couples I stayed with, associated feeling settled with how much they had decorated or done their house up. Two different mums said they would feel more settled if they had a room of their own where they could have space for their own projects. (Just what Virginia Woolf was on about!) One person felt settled because of his record collection and his furniture. For me there are often details or a certain atmosphere that makes me feel at home. A poster on the wall of Axl Rose could be enough.
This study is by no means scientific, the answers are based on interviewing 15 people in England and 15 people in Sweden, aged 22-59. Look out for the next question: What do you feel most proud of in your home?
PÅ SVENSKA
Posted by Louise Halvardsson at 20:32 No comments: Links to this post