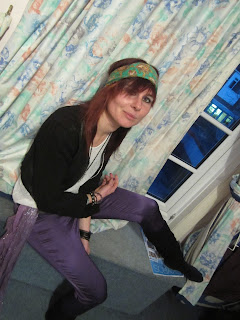 Yesterday I went to my workmate's 30th, and it was a relief that no-one behaved like 30 which gives me hope for my upcoming birthday.

Posted by Louise Halvardsson at 17:35 No comments: 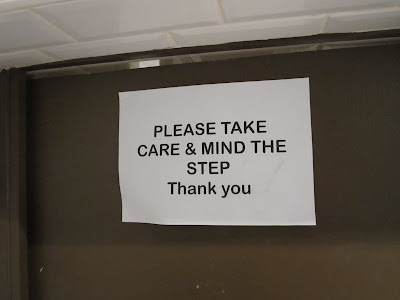 I had to laugh seeing this sign in the Prince of George pub in Brighton ...

English is definitely a more polite language than Swedish.
We don't even have a word for "please" ...
so in Sweden this sign would simply say "Mind the Step"
or more likely ... there wouldn't be a sign at all!
Posted by Louise Halvardsson at 17:50 No comments: Links to this post 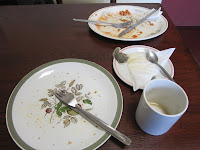 When a friend from Sweden visited me in Brighton a while ago he insisted on going to Starbucks (as the very few Starbucks places in Sweden are super expensive). He even bought coffee to bring home, but I wouldn't count it as a cultural experience. Instead I should have taken him to my local greasy spoon, Scotties, in Portland Road where I had breakfast (with an English person) on Thursday.

I do hope these places never disappear. It's great to be able to order eggs on toast or beans on toast with a cup of tea for only £2.50, and I love the way nothing is matching crockery wise. It feels like being in somebody's kitchen eating from a random plate with flowers on and I bet there aren't two mugs that look the same.

The best about my breakfast experience though was the so-called art work on the walls. Or rather the labels stuck to the art works. 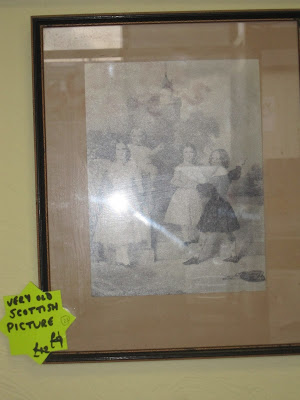 Who wouldn't want to buy the "Very old Scottish Picture" for £9 (reduced from £12)? Or what about another one simply titled "Sailing boat" for £6 (except that it was actually a rowing boat)? Then I spotted the board saying "Special January Offer - all pictures £4.50".

Just like the English pubs, the greasy spoon caffs seem to attract a certain clientele of men who go there as much to socialise as to drink or eat. Already at the door I had an old geezer stopping me just to tell me how good the food was, and that he came to Scotties every day. I haven't seen anything like it in Sweden, where you are taught to keep to yourself. (Also the people I know in Sweden who go out for breakfast usually do it as a special treat, having a "hotel breakfast".) As I sometimes worry about growing old, the greasy spoons cafes give me a hope of community, but there seem to be even less women here than in the pubs ...
Posted by Louise Halvardsson at 16:01 No comments: Links to this post 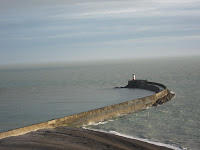 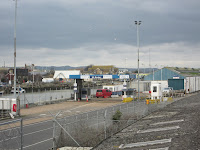 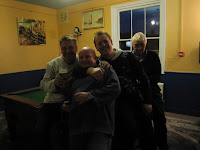 Today I took the train to Newhaven Harbour to think. There was nothing going on at this train station, but I felt quite excited seeing the UK border control, as if I was leaving the country. I boarded the next train in the other direction and got off in Newhaven Town, and walked up to the fort, but it was closed for the season. At least I got a good view from up there ...

After the walk, I went to a pub in the marina area with the aim to write and reflect about Swenglish, preparing myself before the big adventure begins. Instead I ended up playing pool with a bunch of friendly builders ...

This would never happen in Sweden. Or would it? In my hometown there isn't even a pub, just a hotel bar with very expensive drinks. That's one thing I really like about England: if you're lonely go to any local pub and there are people willing to chat to you. However, if you're girl there's a risk of being chatted up, instead of being chatted to ... And I do wonder if it will ever come a day when there will be as many women as men in the pubs ...

I did do some good thinking (and note-making) on the train. What I learnt from this day, and what is relevant to my Swenglish project, is that it's best to be spontaneous and go into things with an open mind, instead of trying to control the outcome.
Posted by Louise Halvardsson at 22:13 No comments: Links to this post