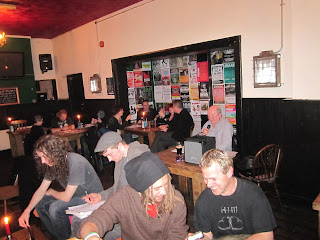 I’d been dreading that I would be taken to a pub quiz at some point. I like the idea of this English tradition: to gather in a pub and team up with friends and strangers alike to answers questions about anything from historical battles to the ingredients of a specific recipe. But in reality quizzes make me uncomfortable because it reminds me that my general knowledge went out of the window when I finished school. And any day I’d prefer to have a chat about weather to being trapped in a quiz for two hours.

The closest Sweden comes to quizzes are "tipsrundor" - nature trails with multiple choice questions pinned to trees. This activity normally takes place in the morning and you’re more likely to win a wooden carved horse than a bottle of wine or cash to spend in the bar. Despite my love for nature I’m not a big fan of this activity either. There’s something about playing games that I can’t get into, perhaps because I don’t care too much about winning or losing. In fact I often want to lose so I can get on with doing something else.

Yesterday wasn’t too bad though. The person I’m staying with has got a good brain. He follows the news and there are books on political, historical and social topics in his bookshelf. When he went out for a cigarette everybody had to wait for him to come back so the quiz could continue ...

There were a few questions that would be easier to answer if you grew up in England, e.g. who was the composer on the £20 note (Elgar) and which East Enders character survived being buried alive by his wife (!?). I was happy though that I knew the answer to the literature questions: in which decade the Lord of the Ring novels were first published (50s) and who the heroine was who married Mr Rochester in a Charlotte Bronte novel (Jayne Eyre).

It also helped that we were about ten people in our team and I wasn’t the only one hiding behind my glass. Funnily enough no-one at our table knew how many fluid ounces there are in a a UK pint (20). There were eight teams taking part and we came number four.

P.S. I was ashamed not to know how many stars there are on the New Zealand flag (4) as I've got NZ relatives and my brother is a flag freak!