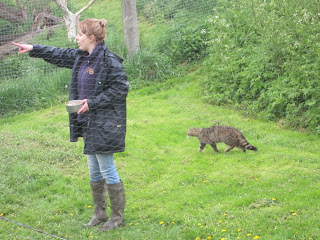 I thought that staying in a house with two kids, two cats, mice and fish would be enough wildlife for me to cope with, but on the Bank Holiday Monday my host and her family took me to the British Wildlife Centre outside Lingfield.

The animals in England are pretty lame compared to the animals in Sweden. I wouldn’t really feel threatened by badgers, otters and foxes if I encountered them in the wild. In Sweden I’ve had my heart stopped on a couple of occasions when bumping into an elk or being close to a wild boar. I have never seen  wolf or bear or lynx, but they all live in the Swedish forest. The most exotic animal at the wildlife centre was the Scottish wildcat who can run 30 miles and hour and can’t be tamed even if you look after it as a kitten. I was also quite impressed by the showcase of flying owls. 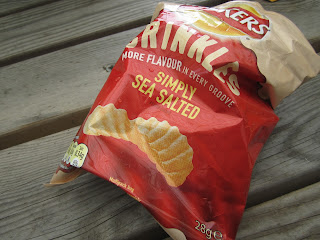 During the day I tried to think about how an outing with an English family differs from an outing with a Swedish family. Having your picnic outside even if it’s cold and rainy is definitely somethng that happens in both countries. However it would be rare to have crisps with your lunch and is something I would miss if I move back to Sweden. (One of the few times I've seen portion sized crisps bags is at school discos.)

In the picture above the wildcat is about to be fed chicks for lunch. The youngest boy in the family couldn’t believe that was the same sort of chicken he was having, saying that his sliced meat was ”fake chicken”.

P.S. When we got back to the house one of the so-called domestic cats had done a runner, but was found the next day.