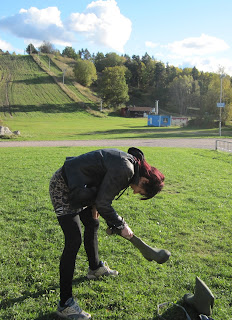 I spent the weekend at a conference with the Raelian movement as last week’s host is a Raelian. What is a Raelian? They look like you and me and they want to make the world a better place through technical development that will free society from work. They believe that we were created by people on another planet that is 25 000 years ahead of us.

Apart from meditating, watching video clips about future technology and UFO sightings we had a lot of fun as you can see in the picture. Competing in the Swedish national sport ”throwing the welly boot” isn't very high-tech, but the Raelians are so peaceful they forgot to count the scores ...

At night we went up the ski slope (no snow yet!) to watch the sky. I was happy to see a shooting star (my first ever!), and my host said that for him it’s not important to see an UFO; he believes they’re out there anyway, but that the aliens have better things to do than flying by the earth all the time.

The Raelians believe that it will be possible for us, human beings, to create life both here on earth and even on other planets, in a not too distant future. Perhaps I should go and live on another planet so I don’t have to choose between Sweden and England!

Click here to read more about the Raelian movement

PS. Simplified life forms have already been artificially created on earth. In 2010 a group of researchers at the J Craig Venter Institute created a new functioning DNA-code that was introduced in a cell.

Posted by Louise Halvardsson at 16:30