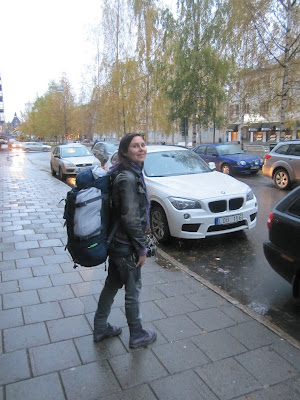 If someone had told me a year ago, when I had not yet come up with the Swenglish idea, that in a years time I would be in Umeå following an archaeologist for a week, I would have laughed.

I was stupid enough to go to the City of Birches without a winter coat and with boots that leek, so the first thing I did was to go shopping for welly boots with fleece soles. The seasons are more distinct in Sweden compared to England, maybe because there are more trees. I've never been so fascinated by autumn before; I can’t stop looking at the leaves that shimmer in yellow, orange and red. The seasons is something many of the people I have stayed with would miss if they lived abroad, but last week’s host said it would be enough to have winter every other year ... 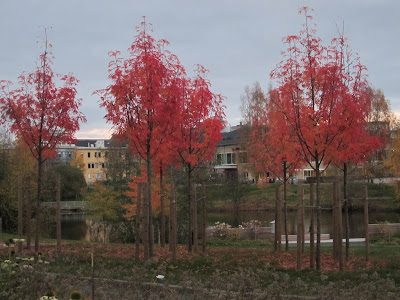 If it wasn't for this project I would probably never have ended up so far North. Already when I changed trains in Sundsvall the air on the platform was like a curtain of ice. A bit like travelling from the South of England to Scotland. And it feels like I’m as far from my hometown as when I’m in England. In fact it takes the same amount of time to travel from Nässjö to Umeå as it takes travelling from Nässjö to Brighton.

The pace is more peaceful here. People speak more slowly and says ”fara” (”journey”) instead of ”åka” (go). Every time they’re going to visit a friend it sounds as if they were going travelling. Probably because of the distances up here. I've also learnt a new word: ”he” that does’t mean ”he” as in English: it’s a word for ”put” – a word that doesn't exist in the South. 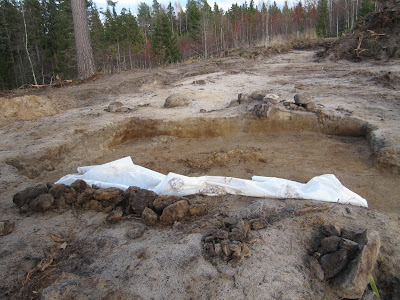 What is it like following an archaeologist then? Well, a bit like hanging out with a living history book. I've followed my host to places where she’s been digging and they've found cooking spots from the iron age. But next week, when the frost comes it will be hard to dig. Now we’re going to journey out in the swamplands to pick cranberries!

PS. I'm up North for a bit longer, next week I'll be staying in a community a bit outside Umeå.