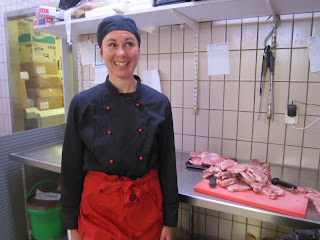 I had feared this week for ages. As a part of Swenglish I shadow my hosts at their workplace when possible. My childhood friend and current host spends her days cutting up pigs and making mince out of cows. Luckily I just had to observe rather than take part, but that was sickening enough.

In Sweden there are hardly any proper butcher’s shops left. The closest you get to a butchers’ is the ”fresh” meat area of a supermarket, but even so that kind of business is dying down in favour of pre-packed meat.

The small supermarket where my friend works is situated in a village near my hometown where the local dialect is very strong. I found it amusing to listen to the customers who sounded very rude, even if they didn't mean to. There aren't any pleases and not too many thank yous in Sweden.

At the end of the day I helped with the washing up, rinsing off corpse parts from the trays and pouring bloody water down the sink. And I was close to puking when I was shown the ox tongue. My friend thought I would get used to it, but I declined her offer to spend another day at her workplace ... To me, eating pigs and cows and sheep is the same as eating cats and dogs and other pets, so that's why I find it so hard to handle meat.

I’m pretty convinced I’ll remain a vegetarian for the rest of my life. It’s better for the animals, the environment and the health. Even though it was a small supermarket, I was happy to find a few vegetarian and vegan products like oat ice-cream and soya sausages. In general I think there are more and better veggie options in English shops, and the labeling in Britain is great: you don’t have to read the ingredients, just look for the wording ”suitable for vegetarians” which doesn't exist in Sweden.