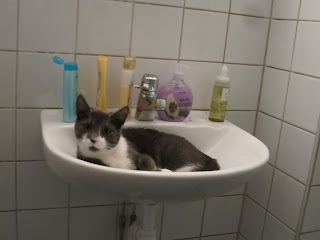 ”I’ll be surprised if you make it to 30 weeks. Do you realise how tough it is?” That’s what a friend said when I told him about Swenglish. I've had a couple of moments (like week8 when I was sick and staying in a caravan) when I've thought ”I’ll never make it to the end”, but I've never been as worried as I am now.

With only two and a half weeks to go things are starting to go a bit wrong. Last week’s host cancelled with a day’s notice because her child was sick and I had to call a person on the waiting list who luckily said yes to hosting me. This week I've had a cat problem.

My host lives in a one bedroom flat with three cats. I’m aware that I’m a bit allergic, but thought I’d give it a try. I lasted two days. Then I got fed up with not being able to breathe properly because of my asthma, so we had two options: moving me or moving  the cats. As you might know, dogs have masters and cats have staff. And it would have been a matter of removing all the hair as well, so it was easier to move me.

Now I’m back with last week’s host who was kind enough to let me crash at his place, even though he’s annoyed with me for leaving sock fluff everywhere and splashing water all over the bathroom. To his relief I’ll still follow the cat mummy around in the daytime as I've promised to help her organise a birthday party. Her 40th. (I doubt I’ll have to make cucumber sandwiches as was the case for the birthdays during week5.)

God knows what I’m doing in 10 years time ... all I can concentrate on is completing Swenglish. Let’s hope I last another 2 weeks! I just got a text from host number 29: ”Eat garlic so you don’t get sick for our mad week! :D”. Who said Swedes were boring?

PS. I really love cats, it's so unfair that they make me sneeze and itch and of course I can't help cuddling them even though I shouldn 't ...