Question 6b: How does it affect you if people make language mistakes? 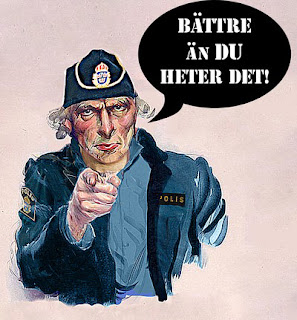 8 of the 15 people I stayed with in Sweden are "language police" which is a common expression in Swedish for someone who gets annoyed if people use the language in the wrong way.
But only 4 of the 15 people i stayed with in England are bothered about mistakes.
What the "language police" in Sweden said:
"I'm a bit of a language snob unfortunately. I get anxious if I've sent a text with spelling mistakes and can't take it back. I can also get turned off if a guy writes a sloppy text."
"I notice how language is used and if it's not used according to the norm I react. If someone makes a mistake on Facebook I'll write an ironic comment. It's fun to take the piss. I also have this obsession if someone writes an exclamation mark or put dots at the end of a sentence I have to count the exclamation marks or dots."
"If someone makes spelling mistakes, I think they're stupid. Or if they split a compound word ... Then I can't be their friend. I'm very honest, I feel bad if I've spelt something wrong."
What the "language police" in England said:
"I do notice when people make mistakes. I immediately wonder how educated they are, what class they are, it’s terrible."

"I’m a bit of a pedant when it comes to written English, partly being a teacher. Whenever I read I pick up mistakes, I'm an unpaid proof-reader."
"I’m quit sensitive to people who make mistakes and I correct them. Especially English people" (said by Swede in England.)


And there are some English language rebels:
"I like the damage of language and how new things develop. That "google" * can be used as a verb and people using “literally” in the wrong way."

"I’m not bothered at all. Languages are evolving. Without changes there’s no revolution. If you’re strict about language it’ll never change. There wouldn’t be words like "LOL"."


What I say:
I think the language police exists to a bigger extent in Sweden because Swedish is such a small language and hasn't been as influenced by other cultures. Both Swedish people and English people are tolerant if foreigners make mistakes though. The biggest case for the language police in Sweden is the splitting of compound words, e.g. in English you would write "police station" - in Swedish you world write "policestation".
I really don't care about language mistakes. After having lived in England for many years I now struggle with both English and Swedish! My English will never be perfect and I've lost some of my Swedish from living abroad. When I was interviewed on telly about my novel I kind of spoke English in Swedish. I said that I was from a small town. In Swedish you'd say "I'm from a smalltown".
PÅ SVENSKA
*Although the Swedish invention "ungoogleable" was disliked by Google!
The picture is from Matilda's blog and is hard to translate, but can possibly be compared to the language difference between "You and I" or "You and me".

This study is by no means scientific, the answers to this question are based on interviews with 15 people in England and 15 people Sweden, aged 22-59. Next question: What's your favourite word?

Posted by Louise Halvardsson at 12:10