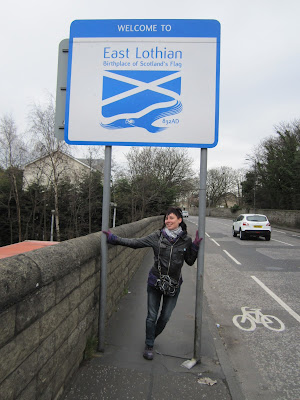 I'm having an Easter Break from Swenglish and am spending the week in Scotland which in some ways is more similar to Sweden than England is, at least when it comes to the climate! The other day I got caught in a hail storm.

Swedish people (and a lot of other nationalities) often make the mistake of calling the whole of Great Britain "England", but Scottish people would find that very offensive! Scotland does feel like a different country especially as they've got their own Scottish banknotes and their own parliament. And I love it how everyone says "wee" instead of "little".

It's weird to be on holiday; I'm still in the mood of observing the person I'm staying with and keep taking photos of my friend. Who knows, I might include a Swottish chapter in my Swenglish book ... My friend, who lives in Edinburgh, think I should solve the Sweden-England dilemma by moving to Scotland!

Posted by Louise Halvardsson at 16:50