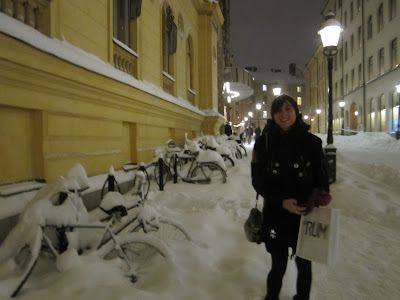 When I first saw snow back in October I was excited and felt very English – or perhaps childish – for pointing at the flakes saying ”Look it’s snowing!” as if I’d never seen snow before. Now when there’s winter for real in Sweden the novelty is gone.


And I’m worried. Will I survive the Swedish winter? I haven’t spent a whole winter in Sweden since 2002/2003. The snow is like an unexpected the guest that you are happy to see briefly in October and can put up with in December, but when that guest is overstaying until April you’re very fed up. Perhaps this white guest will leave for a few weeks and you’ll feel the vibes of spring, but just as you put your winter coat in the cupboard you can be sure that Ms White returns once again ...

At least the Swedes are better prepared for winter than the English. For a start: it is very warm indoors! No one is saving on the heating as most people who live in flats whether they’re are renting or owning have the heating included in the rent or fees. The traffic doesn't stop even though there are delays.The schools and shops and libraries don’t close. People don’t panic buy food in the supermarket. In a way I miss the days of occasional snow in Brighton when I could leave work at 3pm because there was no public transport ... (Ironically my host this week couldn't leave work because they were removing snow from the roof outside her office.)

And I’m not just worried about the snow. I've only got two weeks left of Swenglish, two weeks of deciding whether the live in Sweden or England. The snow is definitely going against Sweden, but the standard of housing is a big big plus.

PS. If you wonder about the skull on my coat pocket, it's not a Christmas tree decoration as an English friend once thought. They are ”reflectors” and a majority of people wear them in Sweden so they can be seen by cars in the dark.