Question 5: Where have you travelled? 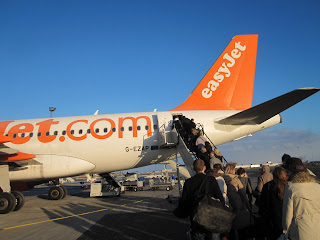 Colombia. Vietnam. South Africa. Greece. Denmark.
The countries above are only a few examples of where the 30 people I stayed with had travelled. Based on the talks with my study subjects I've learnt that people in England and people in Sweden are equally well travelled. Everyone had travelled to at least another country in Europe. About half of the Swedish people and half of the English people had been outside Europe. Most of the participants were open to living abroad for shorter or longer periods of time, but not many would like to live abroad permanently.
It's not very interesting to make a list of all the countries you've visited. The interesting thing is what you've learnt from other cultures. A weekend break at a hotel doesn't give as much as staying with or spending time with local people.
Thanks to my Swenglish project I gained new insights even when staying with people in my hometown. I thought I knew everything about Swedish food culture, but I learnt that you can have bananas in your mince sauce and cheese on your pancakes. You can't read about that in the tourist catalogues. Maybe because it's not typical for Sweden. But I'm after what's not typical! Going to London and have tea is boring. But to get invited to a Londoner's home and have Turkisk coffee is exciting.
When I went to Barcelona for my 29th I felt stressed out running around photographing the sights I'd read about in my guidebook. Never again! The best about the Barcelona trip was talking to a couple of Spanish guys at my hostel. They lived just outside town but had chosen to stay at the hostel so they could have a night out in the city. After five minutes chatting I learnt more about Barcelona than I did from two days of sightseeing.
There's a difference between holidaying and travelling. If you just want a holiday and relax it doesn't matter if you just see a hotel, a pool and some old church. But to really travel you have to spend time with the local people. Pretty obvious. Not always easy though ...
PÅ SVENSKA
This study is by no means scientific, the answers are based on interviewing 15 people in England and 15 people in Sweden, aged 22-59. Look out for the next question: What does language mean to you?
Posted by Louise Halvardsson at 16:10