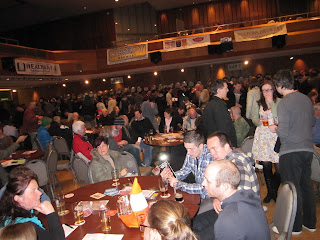 As part of your entry fee you got a glass and in that beaker you could be served pints, half-pints or a third of a pint. I couldn’t believe my eyes. The same hall where I had worked as a ballot steward at the local elections was now lined with beer and cider barrels. There was no music and all areas were brightly lit as if we were at a conference. 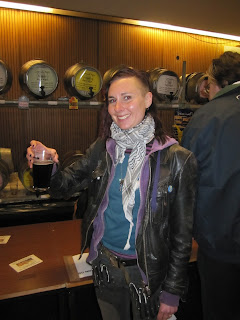 Arriving at six o’clock there were pre-dominantly men between 40 and 60, perhaps older, sipping their pints or halves or thirds, nodding knowingly, searching for the perfect brew: pale, bitter – or dry if they had cider. An organisation called CAMRA (Campaign for Real Ale) was behind the festival and was originally formed in the 70s by four men in the North who were disillusioned with the UK beer market.

A couple of hours later the know-it-alls had left and the crowd consisted of mainly 20 and 30-year-olds who drank just to get pissed even if sips were swapped and the occasionally comment about flavour slipped into the conversation. Most people seemed to pick their pint by name: Kama Citra, Snake Slayer and Nightmare were only a few of the choices. Others looked out for the ales with the highest alcohol percentage.

To say that the beer festival was a male dominated event isn’t an exaggeration. There weren’t that many women in the room who gave their opinions on real ale. In England, as well as in Sweden, I’ve experienced that people (often the ones who are a bit older) have been surprised when I’ve wanted beer instead of wine or a drink at the pub. Times have changed, but the older generation still frown if a woman orders a pint. Once I went to an informal job meeting with a male colleague and the person we met up with asked what we wanted to drink. Pint of Harveys my colleague said, and I said that I wanted the same. The person who offered the drinks looked at me and said: half pint? As if I wasn’t allowed a full pint because I was a girl.

I’m not saying it’s a good thing that girls drink as much as guys nowadays, but it’s not fair to assume that a girl drinks a certain drink and a certain amount just because she’s a woman. And the same goes to say for guys. I’ve met men who towards the end of the night only wanted half a pint, but haven’t had the guts to order one because it’s not considered macho enough.

Posted by Louise Halvardsson at 17:40