Question 7: How did you end up where you live now? 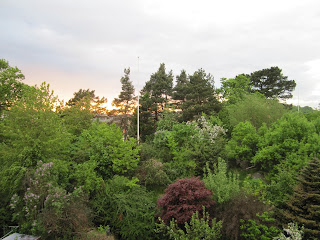 This is the view from The Attic where I live right now. How did I end up here? Would you like to hear the short or the long story?
Question 7 wasn't an easy question. Sometimes I had to limit my question from country to city to flat/house. It would take up too much space publishing all the answers; besides it would be hard for the project people to remain anonymous.
What surprised me though was that a lot of the people had ended up in their current location because of love. People hade either moved somewhere because of a partner, moved in with a partner or had wanted to get away from a partner. The second most popular reason for ending up somewhere was university studies or other studies. Other reasons were work, money, homesickness, a longing for nature and a desire to have a place of one's own.
Yesterday, I reluctantly changed my "current location" on Facebook from Brighton to Gothenburg (Göteborg). I still find it hard to accept that I actually don't live in England at the moment. It's not like I've made a final decision, but I'll stay in Sweden at least until January. So how did I end up here then?
Short story: Midlife crisis ("30-year-old-crisis" in Swedish)
Long story: I did a project that involved staying with 30 different people (15 in England and 15 in Sweden) during 30 weeks and I asked each person 30 question, hoping that their answers would help me work out what to do with my own life. One of the things that I worked out was that I wanted to try university studies. And when you just want to try something it's a big advantage when education is free which is the case in Sweden. Of all the places I visited in Sweden I liked Umeå (in the North) and Gothenburg (on the West coast) best. The reason I chose the later was mainly due to the location. Closer to home. Both to Brighton and to the forests of my hometown. The reasons for ending up in The Attic are private.


This study is by no means scientific, the answers are based on interviewing 15 people in England and 15 people in Sweden, age 22-59. Look out for the next question: How settled do you feel in your country/town/neighbourhood/flat or house?