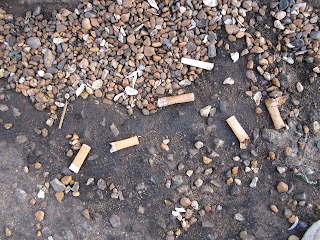 This week I’ve been to work with my host who is a librarian. Apart from being a bit more organised (even the picture books are in alphabetical order), her library wasn’t that different to the libraries I’ve worked at in England. What surprised me more was an official sign on the notice board informing me that smoking was banned during work hours.

I’m not a smoker and I’m by no means supporting smoking as I know people who have died painful deaths because of it. It’s fair enough to ban smoking inside work places and perhaps stretch it to outside the work building if it irritates other people, but to ban it altogether? I’d call that discrimination. One reason for the ban is that ”no customer or citizen should be exposed to people smoking or smelling of smoke during work hours”. What’s next? Will garlic be banned as well? And what if someone gets exposed to a member of staff chewing gum or sucking on a cough sweet? Isn’t it your own responsibility if you want to ruin your lungs or teeth?

When I asked my host what she would not miss about Sweden if she lived abroad she said ”It can be a bit too moralising sometimes, but it’s not only bad, it depends on how much I agree”. She’s right. I think the smoking ban in pubs that came into force in Sweden in 2005 and in England in 2007 is great, but I don’t mind if someone wants to smoke outside - whether it’s during work or party hours doesn’t matter.