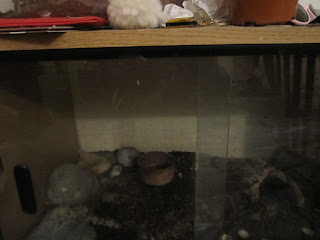 According to The Xenophobes guide to the English, English people are doting on their pets more than any other nation. I don’t know if this is true – my friends in Sweden who own pets are quite crazy about them too, and I don’t mind; it’s quite cute the way some people talk to and about their animals as if they were family members.

What I do mind is being called ”pet” as an affectionate substitute for ”sweetie” or ”darling” or whatever. (In Sweden you only use words like ”sweetie” or ”darling” if you’re truly fond of someone and mean it with your whole heart.) The first time some said ”Alright, pet” or ”See you, pet” I got quite upset – I’m nobody’s blooming dog! I thought it was a joke.

So far none of my Swenglish hosts have called me pet, and as I’m allergic to cats and hairy dogs I’m trying to avoid staying with people who got animals, or so I thought ...

It’s the fourth day and my current host hadn’t even mentioned any pets until today. I’d convinced myself that the tanks in the living room and bedroom were empty as I haven’t seen anything stir, but it turns out I’m sleeping under the same roof as two snakes and four spiders!