Week 1: The Quirks of English Toilets 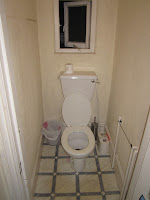 Before I moved to England I was warned about English toilets.
“They have carpets in the loo!” people told me, looking appalled. “What if you’re sick? Or spending a penny when you’re drunk? It’s not like you can wipe the floor with disinfectant soapy water after …”
The toilet in the house where I’m staying this week is to my relief carpet free, but there’s another problem: there’s no sink. 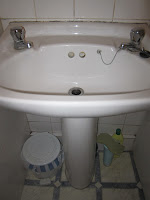 Sometimes dirty (and I mean literally dirty) business happens in the toilet and you want to wash your hands straight after you’ve been. If the sink is located next door, this isn’t that easy; someone might be having a bath and there you stand with the p-word on your fingers not knowing what to do. Of course you could wash your hands in the kitchen sink, but that’s not very hygienic.

Another quirk about English bathrooms is that in a lot of places there are still separate taps for hot and cold water, and the hot tap is often so hot you burn your fingers. There are warning signs everywhere, but I still forget. If you just want to wash your hands it seems like a waste to put the plug in and mix the water, so most of the time I end up washing my hands in either freezing cold or scorching hot water. (But I’ve seen people having both taps on at the same time, moving their hands between them.)

I pointed out the problem with sink free toilets to the person I’m staying with and she agreed it wasn’t very convenient, but said that nowadays, for health and safety reasons you’re probably not allowed to build a room with just a toilet in it.*

She didn’t really have a comment about the separate taps as she’s so used to it, but her Swedish housemate who’s a care worker said the scorching hot water ruins his skin because he has to wash his hands all the time. And talking about health and safety, he also mentioned that mixing the water in the sink isn’t very hygienic as you wash your hands in your own dirt, a bit like having a bath which is still very popular in England. (For four years I lived in two different flats in Hove with no shower, only a bath with no shower hose!)

I think a little bit of dirt is good for you though; Swedish people tend to be too clean and that’s probably why a lot of people suffer from allergies in Sweden. I’m already excited about what the toilet conditions are going to be in the next place I’m staying. Funnily enough, after writing this, I’m almost hoping there’ll be a carpet as it will at least keep your feet warm(er).

*Just had a comment on Facebook from Liz saying "But - separate loo means not having to wait while someone finishes their shower/makeup/cleansing ritual etc." Fair enough!

Posted by Louise Halvardsson at 13:14