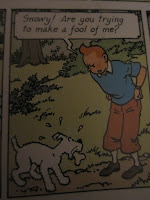 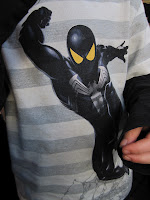 At 6.30am I get woken up by Spiderman – the bad black one who’s made out of yucky slugs. The good Spiderman is made of small blue and red spiders that aren’t yucky. That’s what I learnt from the 4-year-old I’m staying with this week.

To share a small space with a child and his mum is challenging as we constantly bump into each other and the furniture, but I think that’s the price you pay for living in the middle of a big city, even in Sweden.

What I really like about this week though is reading bedtime stories – or anytime stories to the little boy. It’s nice to be able to recognise characters such as Paddington and Tintin from my childhood in Sweden. Although in the Swedish version Tintin’s dog is called Milo, not Snowy as in the English translation. I’ve also read about Katie Morag, dinosaurs and the Octonauts. What surprises me is that Sweden’s most popular children’s author Astrid Lindgren isn’t very well known in England even though a lot of people have heard of Pippi Longstocking.

One thing that can make me feel really alienated about English culture is that I didn’t grow up with the same books, films and TV programmes. The nursery rhymes and songs are also different. Last week the woman I stayed with taught me Hickory Dickory Dock which she used as a an exercise to warm up her voice before doing a recording.

I better stop here because I’m off to read a Charlie and Lola-story! (Which I secretly enjoy reading to myself even after the kid has gone to bed ...)