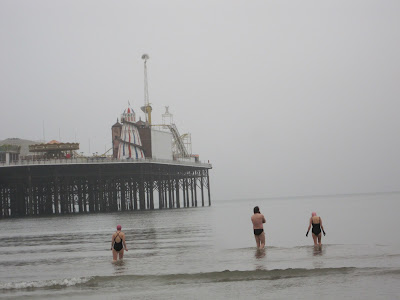 Sea swimming is an old tradition in England and the Brighton Swimming Club, founded in 1860, was the first club in the country.

Yvo Luna - the woman I’m staying with this week has been swimming in the sea every day for eight years and she keeps going all through the winter. Mainly she does it because of the mental health benefits it brings, and as a performer it also helps her with stage nerves.

’It’s a humbling experience,’ she says. ’To be part of something that’s bigger than yourself.’

I’ve been cycling down to the beach with Yvo in the mornings and it’s an amazing feeling to get up at seven and be by the sea before everyone else wakes up, but I’m not tempted to go in the water! At the moment the temperature is about five degrees Celsius and the swimmers stay in for ten minutes – it’s not just a quick dip as I’d expected. And Yvo is very hardcore; she doesn’t even have a hot shower after.

‘It can make you feel colder having a quick, hot shower afterwards. If I get in the shower, I don’t want to get out!,' she says, towelling herself dry. After all the sea-swimming is meant to be a Cold Water Cure.

In Sweden it’s a tradition to cut a hole in the ice in winter, have a dip in the lake and then run into a steaming hot sauna. After seeing the sea-swimmers, that’s cheating in my book.

Yvo is putting on a show in the Brighton Fringe Festival called ”Luna’s History of Madness” where she’ll talk more about the Cold Water Cure and other ways to look after mental health. So after the swimming and breakfast I usually follow Yvo to The Apple Store where she's got a work space. At the moment she's working on her press release. Very exciting!