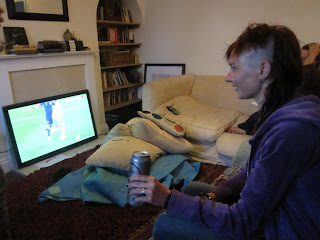 Yesterday Sweden played England in the Euro 2012, and a friend suggested that I make my decision whether to live in Sweden or England depending on the outcome of the match ...

Before Swenglish I hadn't watched a football match for over ten years, but this year I've watched two matches because two of my hosts have "forced" me to join in.

Yesterday's match was pretty exciting as football goes. Especially as my host, her two kids and I all bet money on the game. I believed Sweden would with win 4-2. The odds were so high that if that had happened I would've won nearly £800, but when Sweden scored 2-1, even the English family wanted Sweden to win so they could share the money with me ...

It didn't happen though. England won, 3-2 and I guess that means I have to live in England ... At least until next time Sweden plays England!