WeekX: God Save the Queen 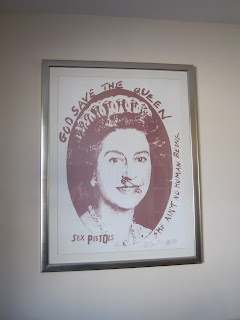 God Thank the Queen for giving us an extra day off work. Queen Elizabeth has reigned England, well Britain, for 60 years and the weekend that just passed was her Diamond Jubilee celebration. For most people it just meant an extra public holiday, an excuse to go mad or get drunk at a street party. Not too many people seemed to care about the Queen herself.

God Save the Queen, the infamous Sex Pistols song was released 35 years ago when the Queen celebrated her Silver Jubilee. I was very impressed by this song and odd as it sounds, Sex Pistols along with the other "77 punk bands" - and their message of rebellion - was one of the reasons I wanted to move to England.

The people I've stayed with so far (including the person who owns the picture in the picture) haven't been big royalists, they see the whole thing as a bit of a joke. However people in England seem to make a bigger fuss over their royal family than people in Sweden. There wouldn't be an extra public holiday just because of the king.*

Yesterday I moved in with Swenglish person number 12 and she spent the Jubilee Weekend camping in nature and was happy to be in total isolation, away from the crazy celebrations. My own views? I find kings and queens somewhat old fashioned and  feel sorry for anyone who's forced into something by birth. Despite what Sex Pistols sang, the queen is a human being, not a Queen.

Author Erinna Mettler has written about her view on the whole spectacle here.


*The National Day of Sweden, 6 June, has recently been made into a public holiday. I just found out that the origin of the day goes back to 1523 when the famous Gustav Vasa became king of Sweden, so after all the Swedes are just as crazy about their royalties as the English are ...

Posted by Louise Halvardsson at 21:45