Week14: The Horror of Marmite 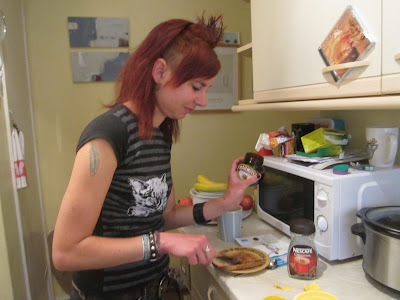 My mission this week was to learn to eat the English spread Marmite. This yeast extract that looks like tar is a by-product of beer brewing and has got a reputation for being one of those things you either love or hate.

The person I’m staying with is definitely a big lover of Marmite as it was the only food he liked when growing up. After five days of force-feeding myself I’m not hating it anymore ... I wouldn’t say that I like it, but I can tolerate it without feeling sick or sneakily having to put my toast in the bin.

What is worse though is that my host is a big horror film fan, and as I have to do whatever my host is doing I had to endure Nightmare on Elm Street. I started off in the armchair, but twenty minutes into the film I was on the sofa holding on to my host’s arm for sheer life ... Twice in the night I woke up having very dark dreams. I was grateful it was one of the shortest nights of the year.