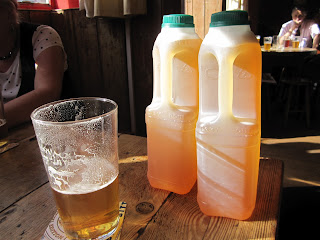 I've been in Sweden for ten days and I haven't yet been anywhere near a pub. I've been hiding in my parents basement working on my Swenglish book. In my hometown Nässjö there's only one pub, in an English town of the same size - 16 000 people - there would be about twenty pubs.

Once when I was in the Evening Star in Brighton, a friend said he was about to leave, but that he'd get some takeaway beer. I thought he was going to pop to the off licence - instead he went up to the bar and got takeaway pints of ale in old milk bottles! I've never seen anything like it in Sweden - it would be impossible anyway as the milk bottles here are all tetra pack.

Posted by Louise Halvardsson at 09:17